About the Pearl McGonigal Award 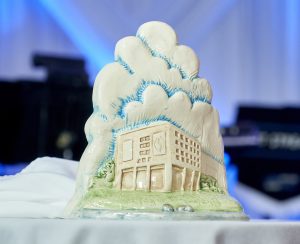 Established in 2019, the Pearl McGonigal Award honours an individual or group for outstanding contributions to Grace Hospital and our community at large.  Ms. McGonigal was the award’s first recipient in May of 2019.

The award itself was created by noted local sculptor Jordan Van Sewell.  Mr. Van Sewell and Ms. McGonigal have been friends for decades.  The sculpture embodies the “Spirit of Grace” with its beautiful prairie sky and flowing Sturgeon Creek.  Each recipient of the Pearl McGonigal Award receives a replica of the original award.

Honourable McGonigal was the award’s first recipient in May of 2019. Ms. McGonigal is a founding member of the Grace Hospital Foundation and was its Chair for almost two decades, retiring in 2011. Under her guidance the Foundation raised more than $25 million in support of patient care at The Grace. In 2016, she Co-Chaired the “Tomorrow’s Grace Capital Campaign”, which raised $6 million to help build the new Emergency Department and MRI Building.

Beyond her service to the Grace, Ms. McGonigal has been a dedicated public servant and a trailblazer, serving as the first female Deputy Mayor of Winnipeg and the first female Lt. Governor of Manitoba.  Her awards and accolades are far too numerous to mention. 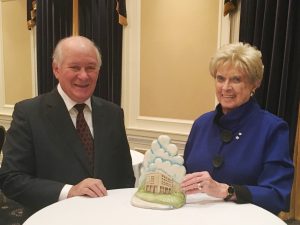 The 2020 Virtual Grace Gala honoured R.W. (Bob) Cunningham with the second annual Pearl McGonigal Lifetime Achievement Award. Bob Cunningham is a business leader and philanthropist, whose efforts have left an indelible mark on his city and province. Aside from his many business achievements, Mr. Cunningham has been a tireless champion for many worthwhile causes, including Cancer Care, Upper Fort Garry Historic Park, University of Manitoba, and St. John’s Ambulance. He has been an active supporter of Grace Hospital Foundation for several decades, both as a donor and volunteer. He has had a true impact on the quality of care that is provided to the patients of the Grace Hospital, and it is our privilege to honour him with the 2020 Pearl McGonigal Lifetime Achievement Award. 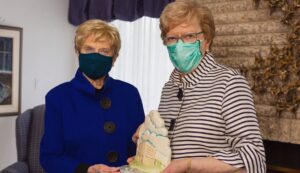 Ed and Marge Danylchuk are the largest donors Grace Hospital Foundation has ever had.  In 2016, they made a $3.25 million gift to support the construction of Grace Hospital’s new Emergency Department and MRI Building.  The Emergency Department is housed in the “Edward & Marjorie Danylchuk Centre”.  They have also made many other gifts over the years, and Marge has been on the Grace Hospital Foundation Board since 2003.  Sadly, Ed passed away in the Fall of 2020.  Before he died, he gave the Foundation a vintage 1988 Mercedes, which we sold to a private collector, with all proceeds going to the Radiothon.

The Grace Hospital Foundation Board of Directors celebrated our staff today with free ice cream from Sargent Sundae. We appreciate our health care heroes! Thank you for all that you do to support our patients at the Grace. #healthcareheroes #icecream #thankyou ... See MoreSee Less